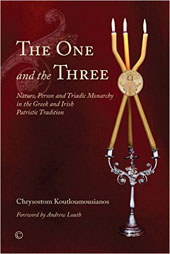 THE ONE AND THE THREE.
Nature, Person and Triadic Monarchy in the Greek and Irish Patristic Tradition

The One and the Three explores parallels between Byzantine and early Irish monastic traditions, finding in both a markedly trinitarian theology founded on God’s contemplation and ascetic experience. Chrysostom Koutloumousianos refutes modern theological theses that affect ecclesiology, and contrasts current schools of theological thought with patristic theology and anthropology, in order to approach the meaning and reality of unity and otherness within the Triadic Monad and the cosmos. He explores such topics as the connection between nature and person, the esoteric dimension of the Self, the relation and dialectic of impersonal institutions and personal charisma, and perennial monastic virtues as ways to unity in diversity.

“Fr Chrysostom offers here a rich and penetrating analysis of the ways in which the mysteries of the Trinity and Incarnation intersect with ecclesial life, in its various dimensions, as reflected in writers of both the Byzantine and Celtic traditions. Calling into question the claim that ‘person transcends nature,’ and the authoritarian approach to ecclesiology this has fostered, the author opens up a much more expansive and balanced understanding of the ‘monarchy’ within the Trinity, and, correspondingly, the relation between person, nature, and communion, with all the implications this has for ecclesial structure and functioning and the spiritual life. This is a work of great learning and profound reflection, which will merits deep study and careful attention.”

“In this rich and incisive monograph, Fr. Chrysostom revisits the issues of trinitarian personhood and ecclesiology rendered justly famous by John Zizioulas and his Western followers in recent decades. Subjecting Zizioulas’s position to a courteous but multi-faceted critique, Koutloumousianos not only returns us to the authentic voice of the patristic sources concerned, but draws new attention to consonances with the ascetic trinitarian theology of the early Irish monastic tradition. Twentieth-century Orthodox discourses of ‘East’ and ‘West’ will be inexorably challenged by this important and timely contribution.”

“In this sensitive and erudite study of the mystery of the Trinity, disagreements concerning which have been the occasion of divisions which have gravely wounded the unity of Christendom, Father Chrysostom finds a remarkable kinship between the theology of the Greeks and that of the early Irish. His richly nuanced exposition is particularly impressive in the depth of its treatment of the Irish sources, which are, for the most part, little known. This book sheds light from the East upon the West, and vice versa; it has much to offer to all who are concerned with the inwardness of Christianity.”

Mount Athos A brief presentation of the history, life and treasures of the Holy Monastery of Koutloumous. 5 euros 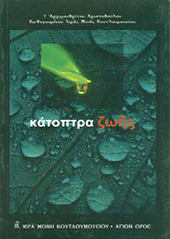 A journey into the world of spiritual heritage by Abbot Christodoulos This anthology comprises a sampling of the sermons and speeches presented by the Abbot of the Holy Monastery of Koutloumous. The sermons include topics involving principles and aspects of the spiritual life. These homilies are the by-product of reflections and discussions upon the mystery of faith and its various expressions. Rooted in Orthodox existentialism with a pragmatic slant, this anthology first traces the social crisis in the human person, then reveals that all personal problems lie deep within man’s heart -the starting point where the healing work of Orthodox Patristic Wisdom commences and upon which the writer draws.

ELDER PAISIOS THE SIGNS OF THE TIMES

Texts and discussions with elder Paisios concerning the signs of the times. It includes an extensive introduction by the Monastery on the philosophy, the ideology, and the methods of the masterminds behind the new world order. special offer 1,5 euros 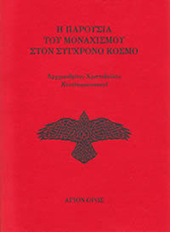 THE PRESENCE OF MONASTICISM IN THE CONTEMPORARY WORLD

By Archimandrite Christodoulos, abbot of Koutloumous Monastery A lecture on Monasticism.

The presence of the monastic in the world has to do not so much with social or cultural activity. The stillness of a monk, unlike the understanding and experience of stillness in the secular world which is usually characterized as the absence of purposeful activity, has a distinct and immense density. It contains the most creative, diligent and painstaking action; for it is connected with the purification of the heart, the pursuit of holiness, the discharge of the divine grace. The monk renounces the world. Nonetheless, he is a friend of life, of nature, and of society. In the very exercise of renunciation he cultivates and perfects this evangelic stance of life, a real friendship with people and the whole of creation.