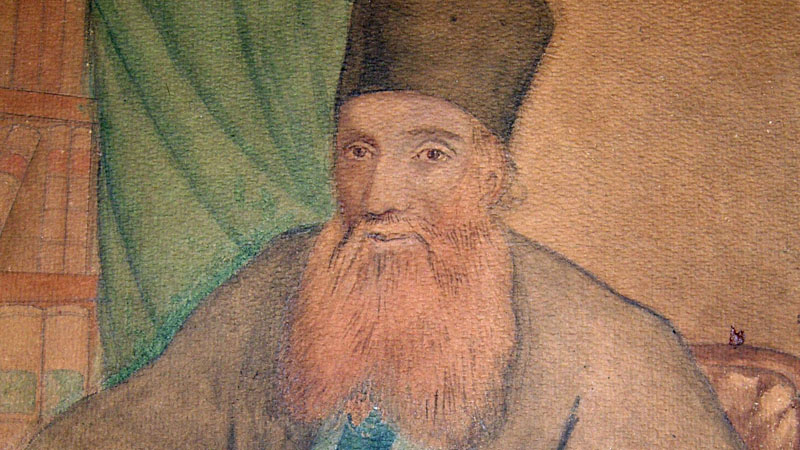 Bartholomew Koutloumousianos was born on 22 nd December, in 1722, on the island of Imbros in the northern Aegean , near to the coast of Asia Minor . He received his first schooling on both Imbros and the neighbouring island of Enos .

At the age of 21, in 1793, he went to the Koutloumousiou Monastery on Mount Athos where he professed the monastic life. He was subsequently ordained a deacon and soon after a priest, and it was from the monastery that he took his name. While on Mount Athos and within the environment of Koutloumousiou he widened his knowledge under the instruction of the priest-monks Chrysanthos and Cyrillus and, most significantly, St Nicodemos of the Holy Mountain .

In 1803 Bartholomew returned to his birthplace with the intention of setting up a school there, but this plan had to be postponed when he went to Kidonies in Asia Minor, together with his brother Cyrillus, who was also a priest-monk, to follow a three year course under the tuition of Sarafis and B. Lesbios at the then renowned Kidonies School. He returned to Imbros in 1812 and tried again to establish a school at the Koutloumousiou metochion of the Archangels Michael and Gabriel, but yet again this second attempt had to be abandoned because of a serious outbreak of the plague as well as the negative reception of the local aristocracy and of bishop Nikiphoros Tselepis.

Two years later, in 1814, Bartholomew went to Thessaloniki in response to an invitation by Ioannikios, the Intendant of Mount Athos, to be a tutor. He taught mainly the children of wealthy and well-established families, such as those of Kaftantzoglou and Charissi, and remained in the city for much longer than he had initially anticipated. The outbreak of the Greek War of Independence in 1821 compelled him to flee to Marseilles in order to save his life and he remained there for six years. Then, in 1827, he was invited by the Greek community in Venice to teach at the Flaginio School where he worked for seven years, as a teacher and headmaster, during which time he contributed considerably to its reorganization. Simultaneously he served as priest to St George’s church, and was generally active in both the social and publishing domains of the city and as a benefactor to the Greek community in Venice as a whole.

In 1834, on the recommendation of his friends A. Moustoxidis and B. Kapodistrias, he was asked by the Ionian Parliament to teach at the Ecclesiastical School of the Ionian Academy, but two years later, following an invitation by his fellow-compatriots and the intervention of the Ecumenical Patriarch Gregory VI, he returned to Imbros with the hope of continuing his vocational work in the educational sphere. Yet once again he failed to establish a school on the island and in 1837 Patriarch Gregory appointed him as the Principal of the recently founded School of Divinity at Fanari in Istanbul . This school had been set up in order to counteract the sectarian teachings of Theophilus Kairis which were being disseminated by his students, and it closed down shortly after its aims were achieved.

Subsequently, in 1840, Bartholomew was appointed Principal of the Trade School in Chalki where he taught until 1847. It was in this same year that he returned to the Koutloumousiou Monastery and, forever an educator, there also undertook a number of school classes in replacement of the renowned Athonias School which at that time had ceased operating. He died on 16 th August 1851 .

Bartholomew Koutloumousianos was a leading cultural figure of his time, a priest and a teacher, a writer, and editor of liturgical texts that are distinguished among the cultural output of his age. He lived during the period when the ideology of the Enlightenment was rapidly spreading throughout Greece . He maintained a critical attitude towards these freshly imported ideas which he accommodated up to the point that he considered they would serve his purposes. He became acquainted with representatives of the Enlightenment, towards whom he kept a relatively open stance, without distancing himself from the traditional beliefs of the Church and the Ecumenical Patriarchate.

He compiled a Grammar of the Greek Language (1828) and The Little Prayer Book (1829), and with the encouragement of the Governor of newly-liberated Greece , Ioannis Kapodistrias, he drew up an enchiridion of Prayers for every Profession and Trade. Although completed by 1831, his work Synopsis was never published, as neither were his other two texts, Arithmetic and Sermons. Bartholomew also wrote two historical monographs, one on his birthplace, Imbros (1845), and the other on the Monastery of the Holy Virgin at Chalki (1846). For many years he was much involved in the editing and publication of the main liturgical books of the Orthodox Church, the Orologion (1831), the Penticostarion (1837) and the Menaion (1846), thus accomplishing a remarkable task for which he was well-known in both ecclesiastical and cultural society.

Bartholomew’s personality and work, which is the subject of the present study, are instrumental in helping us to better comprehend the social circumstances and events of his age, and much previously unknown information from a large volume of unpublished data that has been brought to light in this work also contributes to our understanding of modern Greek spiritual and liturgical life as well as of the history of the Church.

(From the book “Vartholomeos Koutloumousianos”, published in Greek by the Holy Monastery of Koutloumous)